The Consensus of the Long Island Forum on Marine Ecological Civilization: The Realization of the Value of Ecological Products is an Endogenous Mechanism for Long-term Ecological Protection

The “2020 Marine Ecological Civilization (Long Island) Forum” was organized by the Ecological Society of China in conjunction with the China Ocean Development Research Association, the First Institute of Oceanography of the Ministry of Natural Resources, the Central Energy Resources and Environment Commission of the China Democratic National Construction Association and the Long Island Marine Ecological Civilization Comprehensive Experimental Zone Management Committee. The Forum was successfully held on September 18-20, 2020, in Changdao, Shandong. The theme of this forum is “Oceanic Practice of Lucid Waters and Lush Mountains Being Invaluable Assets”, and three sub-forums are set up to focus on the accounting and value realization of ecological products, the construction of marine nature reserves and national parks, and the integration of ecological environment protection in the Jiaodong Peninsula. Discussions were conducted on three topics, focusing on how to apply ecological science knowledge to ecological protection and marine management business, and to provide suggestions to the central and local authorities from different perspectives. 87 representatives from 26 government management agencies, 32 scientific research institutions, 5 companies, 4 social organizations and 3 media participated in the forum and 30 experts delivered speeches. Lu Yonglong, vice chairman of the Ecological Society of China was invited to preside over the forum and give a keynote speech. Chen Shang, the executive director of the Society, presided over the meeting.

The forum released the Long Island Consensus on Marine Ecological Civilization initiative, and the full text is as follows: 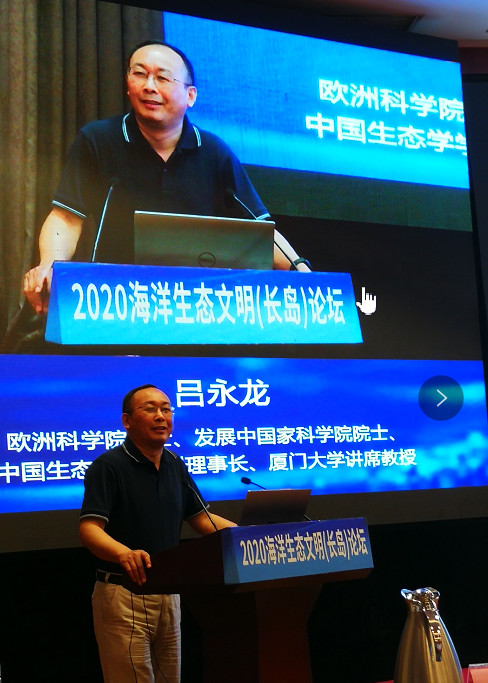